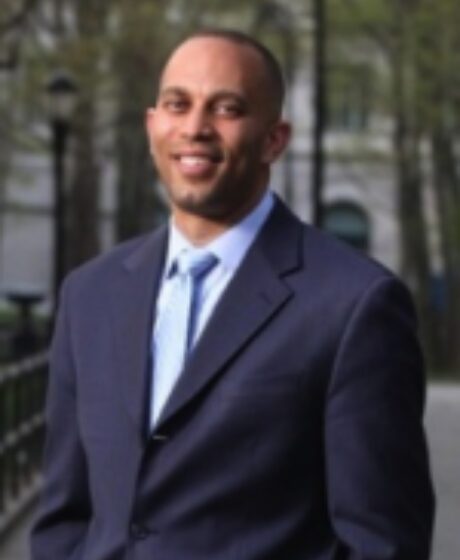 Since his arrival in Congress, Hakeem has been at the forefront of a wide range of progressive initiatives. Dubbed by the Washington Post as “Brooklyn’s Barack Obama,” he has consistently fought for job creation, quality education, affordable housing, gun control, unemployment insurance, a fair minimum wage and the protection of indispensable safety net programs such as Medicare and Medicaid. In January 2015, Hakeem was appointed as the whip of the Congressional Black Caucus. He was also appointed by Leader Nancy Pelosi to be a member of the influential Steering and Policy Committee.

Hakeem currently serves on the House Education and the Workforce Committee, including the subcommittees on Higher Education and Workforce Training and on Health, Employment, Labor, and Pensions and the House Judiciary Committee, including the subcommittees on Courts, Intellectual Property and the Internet and on Regulatory Reform, Commercial and Antitrust Law. As a second-term Congressman, Hakeem has already proven to be a real leader of bipartisan cooperation. He played a key role in advancing the Innovation Act, a patent reform bill, through the House chamber in November 2013. He also is actively involved on the Judiciary Committee Task Force on Overcriminalization, made up of five Democrats and five Republicans seeking to reform the federal criminal justice system.

Before being elected to the U.S. House of Representatives, Hakeem served for six years in the New York State Assembly, where he championed many of the same civil liberty issues he continues to promote today. Prior to his career in public service, Hakeem practiced law at Paul, Weiss, Rifkind, Wharton & Garrison LLP, and served as litigation counsel for Viacom Inc. and CBS.

Hakeem was born in Brooklyn, is a product of New York City’s public school system, and currently lives in Prospect Heights with his wife and two sons.